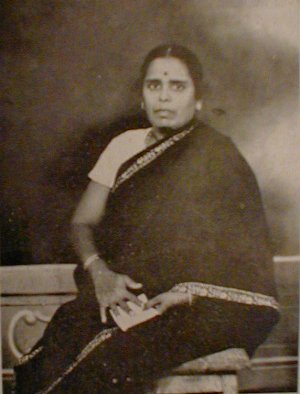 "My grandmother, Anjalai Amma was in jail for more than four and half years.She gave birth to her last son in the jail itself . My grand father Murugappa and my maternal aunt Leelavathy and her husband Jamadhagni were also freedom fighters.Her biography is included in viii std Tamil text book[second semester book]." Courtesy:... END_OF_DOCUMENT_TOKEN_TO_BE_REPLACED S. Manjubhashini was active in the Indian freedom movement. Family stories abound about her deep commitment to the Swadeshi movement and the neighbourhood bonfires of British goods that she organized. She also founded Bala Mandir in 1948, one of the first orphanages of independent India. The late Fathimath Saeed, the 1st first lady of the Maldives (wife of Amin Didi), 1984. Photo contributed by her grand daughter Farah Faizal.