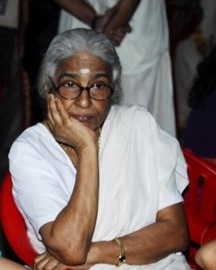 approximate year the photo was taken – 2007

“Late Saraswathy Amma, my maternal grandmother, the protagonist of this write up is the first woman graduate known to me from my family. She graduated in Malayalam in the early 1950s (1954 , I believe) and then went on to complete her Bachelors in Education. At a time when girls weren’t educated beyond matriculation, Saraswathy Amma was the first girl from her family to go to a college for graduation, that too a co-ed college and stay in a hostel as the college was away from her hometown. She’s been a very vibrant and active student by being a part of the college throw ball and basketball team. The determination she had in building a career for herself has always stunned me. Taking an adamant decision that she’d only get married after getting a permanent job for herself at that time is extremely commendable. When all her peers and siblings got married in their teens and early twenties, she got married at the age of 29 after completing her studies and getting a government job.

Having retired as a high school teacher, she was extremely loved among her students and colleagues which I gradually understood from them whenever I met them during various occasions. They’d either be union workers, auto drivers, teachers, doctors, writers, businessmen and what not. I never remember an instance of where she spoke of her merits or ill of others’ and the reason she gave me for that was quite interesting.  She said , ” I don’t consider myself to be important that I talk of myself and if I talk ill about others, you will have a prejudiced mind every time you talk to them thinking about their negative side”.

I consider her to be an achiever not only in her profession but also as a person. Highly empathic to not just fellow humans but to all things living. Our guava and mango trees have never bore fruits like it used to ever since she left us 5 years ago is the prime example of how even the trees have been affected by her loss. There are a lot of principles and lessons that can be learnt from her way of life. I’ve seen her live by the principle “never accumulate too much of those that tear and rot”. It’s clothes and food and that’s what she loved giving people. She neither believed in materialistic accumulations nor did she ever have any and showed the true meaning of the art of letting go.

I remember her not only as someone who lived by her ideals but also as a very cool grandmother who watched cricket religiously, whose favorite player was Virendar Sehwag, who liked to eat out, who was in touch with whatever was happening around her, who had no superstitions, who’d comment very positively on your new haircut, who found shalwar khameez very inconvenient and preferred jeans and kurtis for her grandchildren, for whom a hindu marrying a Christian wasn’t an issue to raise eyebrows, who didn’t believe in matching horoscope for marrying someone, who didn’t believe beauty should be measured by a fair complexion and above all someone who understood you even if you never told her anything. Financial independence and a healthy body and mind has always been her confidence. Not even for a single day did she have to be confined to the bed being ill or bed ridden. She was blessed with a peaceful and silent end. The only wish of hers that was left unfulfilled was the timing of her death. She didn’t want it to happen when any of us had our exams as it would distract us. But being march, it was the time of boards and university exams for which she apologized when being taken to the hospital. I don’t think I’d ever meet a person who’d be apologetic about having a cardiac arrest and feeling guilty about it coming during our exams.

She’d tell people she knew to get themselves educated as much as possible and did everything within her capacity either by means of books or fees or free tuitions.  I’d like to thank this platform for bringing up such an event just in time for her 5th anniversary since she’s left us. I don’t think I could in any language put across what she’s been for me and many others. Just gratitude all my life for whatever she’s knowingly and unknowingly done for everyone around her and touching our lives.”