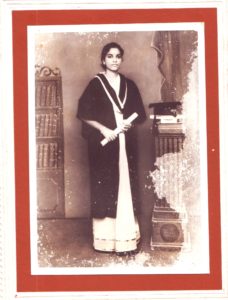 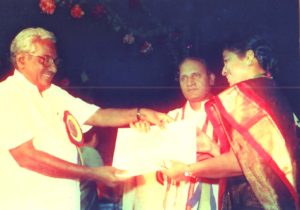 Receiving the Best Teacher Award  (being presented by the then CM of Andhra Pradesh N. Janardhan Reddy), 1988. 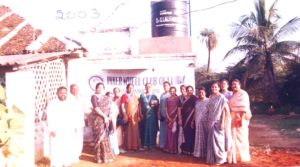 Her social activities: contribution for a water storage tank at a village in 2003 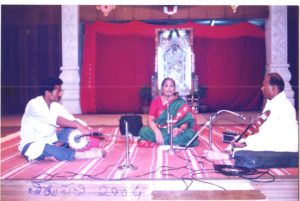 Singing at a concert (her passion), Tirupathi, 2004

“Dr. Gudipati Lalitha is the First Graduate (woman) in our family earning a B.Sc. (Mathematics) degree with a Gold Medal, from Andhra University, Visakhapatnam, India, in 1961. She went on to earn advanced degrees in Mathematics, Computer Science, Music and Sanskrit subsequently. She is also one of the rare women of those times who was not just a graduate but also built a successful career in teaching until she retired in 2001 as the Head of her Department. It is not an exaggeration if she is called a true Renaissance woman – accomplished both in arts and sciences, although she built her career in sciences. As she herself stated – while one is her profession, the other is her passion!

Dr. Lalitha grew up in an orthodox, but progressive, middle class family in Krishna District, Andhra Pradesh. Her parents encouraged her childhood interests on par with her male siblings – this was not a common practice in traditional families during those days.

Dr. Lalitha is an embodiment of qualities that are rare – either for a woman or a man. In addition to acquiring several advanced degrees (B.Sc., M.Tech., Ph.D) in Mathematics and Computer Science, she pursued advanced degrees (MA, M.Phil.) in Liberal Arts (Sanskrit, Music) with equal passion. As a lifelong student with sustained intellectual curiosity, she is also a teacher and a humanitarian.

As a popular teacher, though known to be a strict disciplinarian, Dr.Lalitha inspired many girls to pursue higher education, during her tenure of teaching for more than four decades in a women’s college. In recognition of the extraordinary services rendered by her, the state government of Andhra Pradesh conferred the ‘Andhra Pradesh State Award for ‘Best Teacher’ in the year 1988. Following her spiritual heritage, she has given a portion of her salary from the day she joined as Lecturer in Maths in 1963 for causes that benefitted her community and preserving her cultural values. Her commitment to social and cultural causes continues to this day – a quality that is uncommon in men or women. Dr.Lalitha continues to be an inspiration for the next generation -not just within our family but for all those who came in touch with her.”