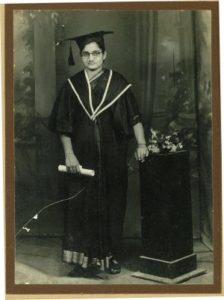 “I was born in an orthodox Brahmin family from a village near Kumbakonam. My father was a teacher in the Nizam’s government. So our family of three brothers and three sisters lived with parents in Hyderabad. I studied in a private school. The two elder brothers were married and my elder brother was in the North of India and the other two brothers were studying in a college and school when my father passed away. I was in second form (Present 7th std). After one more year of schooling, I had to discontinue my studies as none of the brothers had settled down in a job. A year later, I was married to a young village munsiff in a village near Vellore. Used to city life, it was a challenge for me to get used to village life without electricity. Still I overcame the difficulties and earned the goodwill of the family members.

As fate would have it gloom fell over us after just four years. My husband passed away due to a rare illness pleurisy, leaving me with a girl child of two and a half years. As he was the only son, his widowed mother went to live with her only daughter. I was brought back with my child and admitted in a school with a lot of hesitation as there was a gap of six years after I last attended school. My eldest brother took up odd jobs and was shifting places like Mumbai, Delhi etc., My second brother availed a Government Scholorship to study in the U.K and went to London for a period of three years. Younger brother was still in college. So financial position in the family was very weak. It was in the year 1947-48. After Independence , Hyderabad continued to be under Nizam’s rule. In the middle of the year, Razakars struck the city and it was unsafe for ladies to remain in Hyderabad. With difficulty I completed the fourth form and we shifted to Madras. The new rule in Madras in that particular year was that the medium of instruction must be mother tongue. So I had to choose between Tamil and Telugu medium. I opted for Tamil medium. But since I had not studied Tamil in school so far, the Head mistress was hesitant to admit me. She said “I am giving you a seat on the strength of your 100% in Mathematics. You must prove that you deserve it”. I took the challenge after a test in Tamil essay where I had made several mistakes. I worked hard to learn Tamil Grammer all by myself. In three months, in the quarterly examination, I stood first in each of the subjects and continued to hold that 1st rank till the final sixth standard exam (SSLC). My Tamil translations and Precis writings were read aloud to the whole class. Due to the Head mistress’s effort, I got the military scholarship sanctioned for two years, as my eldest brother had worked in the Censor office during World War II. I intended to stop studying and take up a job to help the family. But, Mrs. Arulappan the H.M insisted that I continue my studies. She sent a recommendation to W.C.C to take me as a student and provide a scholarship. I got admission in the college. I enjoyed the merit scholarship as well as the military concession.

By that time my second brother came back from U.K and took up a job. Having secured a first class in Intermediate I applied for B.Sc(Hons.) Physics in the Presidency College and got a seat. The military concession was withdrawn. So I availed the Govt. Widow’s scholarship after pledging to work as a teacher for minimum of 5 years. Calamity struck again and I lost my only child suddenly. I plunged into studies to overcome the grief and emerged with a First class Degree in B.Sc(Hons.) Physics and became the First lady graduate in our family. In a few weeks time I was offered a lecturer’s post in the Ethiraj College for Women, Egmore, Madras. I took it up happily and served for 30 years in the same college and retired as upgraded Professor. Those were the happiest days of my life. After I took up a job, I decided to educate all four daughters of my eldest brother and helped them graduate one by one. After that I helped my brother get them married and settled in life. They also took up jobs. All of them are very much attached to me and are full of gratitude to me. I continue to live with my eldest brother, 100 years old, and my sister in law. I advise young ladies to face all challenges and overcome difficulties bravely. May God bless them all.”